Lightning Safety Should Be Practiced Every Time It Storms 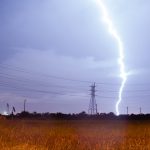 Summer is peak season for one of the nation’s deadliest weather phenomena—lightning. Lightning strikes year-round. Don’t be fooled by blue skies. If you hear thunder, lightning is close enough to pose an immediate threat. That is why the National Weather Service has adopted the saying: When Thunder Roars, Go Indoors!

As part of its Teach Learn Care TLC campaign, Safe Electricity urges parents and other caregivers to make sure children also understand the importance of lightning awareness and how to stay safe.

Lightning can strike up to ten miles from the area in which it is raining, even if you don’t see clouds. This means that if you can hear thunder, you’re within striking distance. A good idea is to use the ‘30-30 Rule.’ According to this rule, if you count less than 30 seconds between a lightning flash and the thunder following it, you should seek shelter from the storm. A smart thing to do is count your 30 seconds inside away from all threatening weather. When the storm is over, wait thirty minutes after the last lightning strike you see before going back outside.

If caught outdoors during a thunderstorm and unable to take shelter in a building, take the following precautions:

Phone use is the leading cause of indoor lightning injuries in the U.S. A direct strike is not necessary for lightning voltage to enter your home through phone lines, electrical wires, cables and plumbing. Other recommendations to avoid lightning shock and damage include:

Don’t forget your pets. Dog houses are not lightning-safe and dogs chained to trees can easily fall victim to a strike. If a person is struck by lightning, call 9-1-1 and care for the victim immediately. You are not in danger of being electrocuted by the victim. More information on lightning safety can be found at the National Oceanic and Atmospheric Administration website at www.lightningsafety.noaa.gov.